The event was designed to convey RERF’s “appreciation” to all those who have cooperated in our research activities, in particular, A-bomb survivors and their children.

In the commemorative lectures, first, Dr. Kazunori Kodama, RERF Executive Director, gave a lecture titled “Health effects study of atomic bomb radiation–its history, achievements, and challenges.” The second lecture was provided by Mr. Hiroshi Tachikawa, an Adult Health Study (AHS) participant, on “My hopes for the future of RERF.” Mr. Tachikawa concluded his speech with the words “I would like RERF to make efforts to increase its name recognition so I can proudly say I’m an AHS participant.” His remark, which is consistent with RERF’s future aims, gave great encouragement to RERF directors and employees.

Between the lectures, the Himawari (Sunflower) Choir, all of whom are A-bomb survivors, performed original songs about their hopes for peace. The harmonies performed by the 22 choir members captivated the entire audience.

RERF would like extend its appreciation to the more than 200 visitors who attended the event, which concluded in great success. 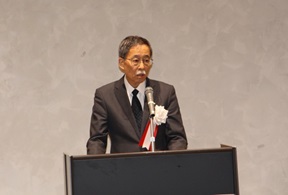 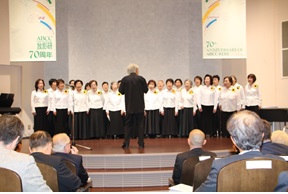