Dr. Akio Awa, former RERF Genetics Department Chief and Associate Chief of Research, passed away on July 11, 2020. He was 86. I want to express my heartfelt appreciation for Dr. Awa’s tremendous contributions to RERF research and my sincere condolences on this occasion to those he left behind.

Dr. Awa laid the foundation for chromosomal research at RERF and maintained and developed the Cytogenetics Laboratory as its long-time leader. He also played a major role in establishing the Biochemical Genetics Laboratory (now the Molecular Genetics Laboratory) and in initiating the lab’s research. His efforts led to the current study of DNA in the children of A-bomb survivors. In the early days of the Cytogenetics Laboratory, human chromosomal research was still in its infancy, with reagents and technology relatively undeveloped compared to that available today. An organizational system for the lab had not yet been firmly established within RERF, which must have caused considerable difficulties. The greatest challenge in the Cytogenetics Laboratory was to prove a dose-response relationship between estimated doses and chromosomal aberration frequencies in individual survivors. However, more than 20 years had already passed since the atomic bombings, and almost no unstable aberrations easily detected by the conventional Giemsa staining method remained in the bodies of survivors, only stable aberrations that were difficult to identify. With no other option available, Dr. Awa worked out a lab manual for analyzing stable aberrations through trial and error using the Giemsa staining method.

Even the International Atomic Energy Agency (IAEA) in its technical reports was not recommending analysis of stable aberrations using the Giemsa method. Dr. Awa must have experienced many trials and made great efforts to establish the method to such perfection. For the next 25 years, studies using the Giemsa staining method continued, resulting in evidence showing that frequency of chromosomal aberrations increased in proportion to estimated dose. In later years, the FISH method was introduced; when the results of the Giemsa and FISH methods were compared, researchers found that the Giemsa staining method was able to detect translocations (a type of stable aberration) at a rate of nearly 70% of the detection rate of the FISH method. I clearly remember Dr. Awa being very satisfied with the result. “I wasn’t wrong after all,” he said gleefully.

Even after Dr. Awa left the front lines of research, he would come to visit RERF from time to time and share anecdotes about old times with me in my office. He sometimes would ask me whether certain employees were still at RERF, and if I replied yes, he would visit his old friends to reconnect. He became a bit of a homebody after he began to experience problems walking, visiting RERF less frequently. Last year, a British researcher who had come to RERF 25 years prior to that time for training on chromosomes returned to Japan with his spouse and expressed his desire to meet Dr. Awa. We together visited Dr. Awa at his home and had dinner at a nearby restaurant. That was the last time I saw him.

I understand that Dr. Awa’s ashes will be scattered with those of his wife, who passed away four years ago, a departure that in my mind perfectly befits Dr. Awa. The sudden news of the death of my loveable but demanding boss, who had guided me for so many years, brings me nothing but deep sorrow. I close with prayers that his soul may rest in peace. 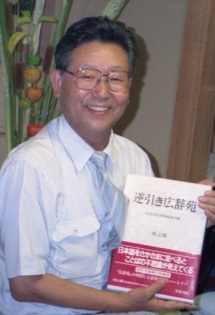