Dr. Robert L. Ullrich, Radiation Effects Research Foundation (RERF) vice chairman and chief of research, received the 44th Lauriston S. Taylor Award at the 2021 Annual Meeting (April 19-20) of the National Council on Radiation Protection and Measurements (NCRP) for his significant lifetime achievements in the radiation sciences related to radiation protection. As part of the award presentation, he was invited to give the Taylor Lecture. The combination of award and lecture is the highest honor granted by NCRP. Dr. Ullrich's lecture, titled "Taking Up Space: The Path to Understanding Radiation Risks," was the featured presentation at the 56th annual NCRP meeting.

In his remotely presented lecture on April 19, Dr. Ullrich explained long-term risks associated with radiation exposure during spaceflight based on results from long-term studies of atomic bomb survivors in Hiroshima and Nagasaki carried out by RERF. Along with presenting an overview of recent RERF results, Dr. Ullrich discussed the complexities of multi-event and multistep processes potentially involved in the development of radiation-induced cancers that could obscure the true picture of risks and mechanisms. To probe risks and mechanisms further, Dr. Ullrich described mouse-study results used as models for prediction of radiation effects, after which he discussed in more detail cellular and molecular studies for the examination of mechanisms. The overall theme of the 2021 annual NCRP meeting was "Radiation & Flight: A Down-to-Earth Look at Risks."

Dr. Ullrich is known as a pioneer in studies of radiation carcinogenesis. He was first elected as a member of the NCRP in 1988 and became a distinguished emeritus member in 2006, as well as played a leadership role in several other international research programs before coming to RERF. He has been a member of numerous scientific national and international advisory groups including the U.S. National Cancer Institute, the U.S. Department of Energy, NASA, NCRP, and so on, as well as several scientific societies, including the American Association for Cancer Research and the Radiation Research Society (RRS). 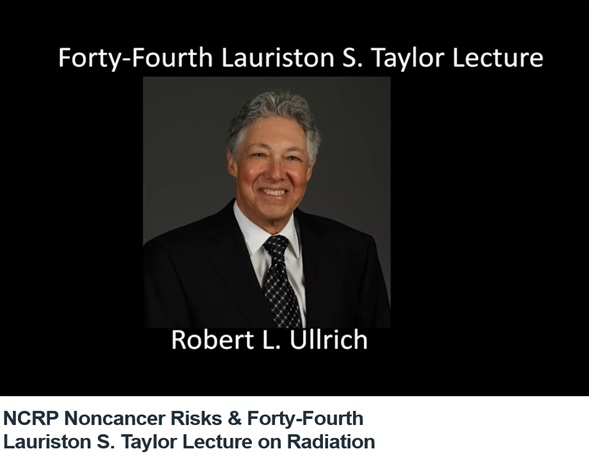