The latest Board of Councilors (BOC) meeting was held in Washington, DC, June 20–21. Below, I explain the BOC and some of the intangibles surrounding the meeting. (For more details of the meeting proceedings, click on the link: https://www.rerf.or.jp/en/information/9boc-e/ .)

The BOC is the highest decision-making body for RERF, consisting of Councilors from the US and Japan. Based on decisions made by that body, RERF sets about managing its operations. In two-day meetings held each year in Hiroshima, Nagasaki, or Washington, DC, BOC members listen to activity reports and future plans regarding numerous elements of RERF’s operations. Afterward, they inquire about details and offer suggestions. They also appoint, or reappoint, directors and other key positions.

This year, RERF again reported on major research projects and training programs as well as financial and accounting matters. Reports about RERF strategic and future plans included mention of the Stakeholder Committee on Usage of A-bomb Survivors’ Biosamples and our planned Research Resource Center, respectively.

Once again, I made presentations to the BOC on RERF’s public-relations activities, both past and future. Since we made progress on the RERF email magazine “E-News,” expanded our School Visit Program, started a Twitter account (@RERF_Japan), and plan to reinitiate the Public Lecture series, Councilors seem to have given the public-relations efforts a thumbs-up.

Much goes into ensuring that any meeting in any field is successful. RERF’s team planned meticulously over several months for this 9th meeting of the BOC. In front of the Councilors, we carefully explained our operations as well as our future ambitions. We were prepared for most everything, as was I, particularly given that for several years RERF’s public-relations activities were characterized as being ineffectual. This time, the Councilors seemed accepting of the direction RERF is headed and I, surely not alone, breathed a sigh of relief. All in all, it was a productive meeting.

Meeting participants and staff, in front of the NAS Building

It was only my second time to DC (the first, I was four), and I enjoyed the city as much as possible in the brief free moments available to me outside the busy work schedule. The last night a few of us visited José Andrés’ Mediterranean tapas restaurant Zaytinya, located in downtown DC, across from the National Portrait Gallery. Countless food and beer varieties were on the menu from Greece and Turkey to Lebanon—mostly non-traditional choices that provided our group with a unique experience.

Andrés is the founder of a non-profit kitchen that devotes itself to providing meals following natural disasters. He was awarded a 2015 National Humanities Medal for, according to the Washington Post, “…cultivating our palettes and shaping our culture.” Our reservations were made without fully understanding Andrés’ celebrity-chef status, but after finally catching on, we felt pretty good about ourselves (see photo). 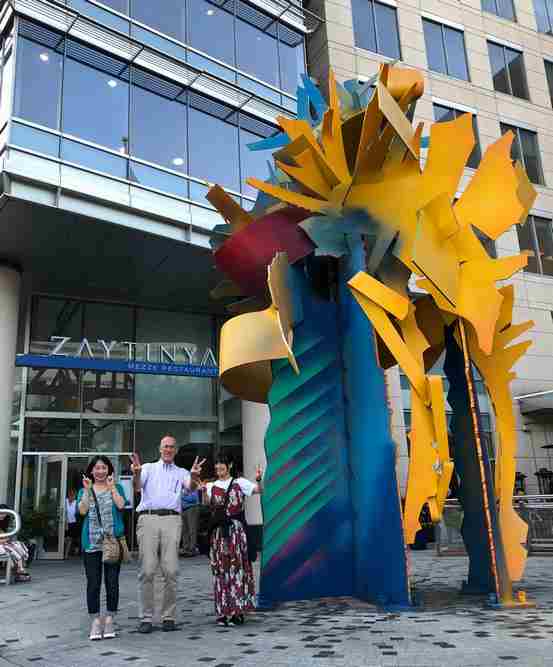 I was most impressed by the people I met in DC. The meeting was held at the National Academy of Sciences (NAS), an organization founded in 1863 following approval by President Abraham Lincoln. The building, located on Constitution Avenue, across the street from the US Department of State, was dedicated in 1924. There, NAS staff arranged the event details flawlessly, including delicious lunches just outside the doors of the meeting venue.

NAS staff and their caterers held a reception dinner—in the evening on the first night in an enclosed inner courtyard formed of original walls from the 1924 NAS building—that featured grilled salmon, pork tenderloin steaks, watermelon-mint salad, and grilled vegetables.

Both in the meeting and informally at the reception and elsewhere, the Councilors were patient and encouraging. The observers representing NAS, the US Department of Energy, and the Japan Ministry of Health, Labour and Welfare gave helpful advice on all aspects of our mission, including our public-relations work.

Outside, as we traveled to and from the venue, the busy group of mostly young workers out and about in the city reminded us of commuter crowds here in Japan—low-key but directed. Including the many tourists at the Lincoln Memorial and Reflecting Pool, as well as the Washington Monument and White House, I didn’t encounter one unfriendly person the entire week (save for the harried drivers who could have waited another beat before laying on the horn). 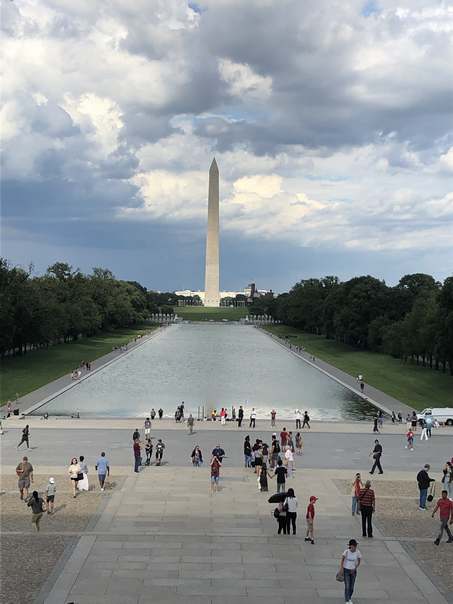 Washington Monument from the steps of the Lincoln Memorial

On the other hand, the weather was hot and very humid, with rain most afternoons, reminiscent of the June rainy season in Japan. Ironically, when we returned to Hiroshima on June 23, the official announcement of the start of rainy season was still delayed by clear skies.

Once back in Hiroshima, media members were waiting for news about RERF’s relocation, a long-standing issue that was touched on during the BOC meeting. Unfortunately for them, we were only able to report to the BOC results from a survey conducted last year about relocation possibilities, in terms of timing, space, and costs, with no other progress on the relocation issue to report. In other words, when relocation might happen is still an open question.

Certain, however, was that the nation’s capital provided plenty of photo opportunities (see at @RERF_Japan, our Twitter page, and our Facebook page “Radiation Effects Research Foundation”) and stories with which I could impress my family and coworkers. My wife has since become a fan (of DC) and proclaims she could live there in the future.

I think I could, too.

We shall see. Stay tuned… 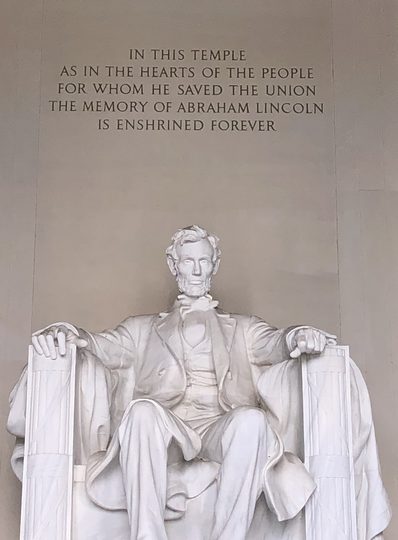 Impressive sight, for sure