On Sunday, July 14, in the meeting room of the Hiroshima Peace Memorial Museum, RERF conducted one of our typical school lectures for the students of the “Junior High and High School Student Peace Club.” The peace club is operated by the Hiroshima Peace Memorial Museum, with the aim of fostering human resources who will promote peace to help ensure a peaceful 21st century free from nuclear weapons and war.

The peace club participates in eight events per year, and RERF’s School Visit presentation, the club’s fourth event of 2019, was an opportunity for the participants to learn about radiation. Attending the event were a total of 34 people, including 25 club students, seven club volunteers, and two Peace Memorial Museum staff members.

After explaining about different kinds of radiation, health effects of radiation, and more, we reminded the attentive attendees that radiation is important and used effectively in our daily lives, but also that respectful handling is crucial.

In the dose attenuation experiment performed in the class, the participants measured radiation doses using as shielding three different boards made of wood, plastic, or lead. When the experiment involved changing the distance from the radiation source to the dosimeter and measuring the dose again, we had the students read the dosimeter aloud and thereby experience the changes in radiation dose, which decreases proportionally with square of distance from the radiation source.

Next, the cloud chamber experiment seemed to greatly interest the participants. Black paper and a sponge were placed in open metal boxes containing ethanol, after which the boxes were sealed with plastic wrap. When the bottoms of the boxes were cooled with dry ice, traces (as white lines) of radiation were visible. When they first saw the traces, the students expressed surprise and cheered. Impressive were the curiosity in their eyes and the enthusiasm in their facial expressions.

Following the conclusion of the event, the students told us their impressions of the class: “I used to think that radiation was dangerous, but here, I found that it is used in various useful ways,” or “I learned more about radiation than in my school classes,” and “I found myself wanting to make a cloud chamber myself.”

RERF’s School Visit program is in its third year. We hope one effect of this effort is that more people will better understand radiation and science.

With the students’ responses in mind, RERF plans to continue its educational activities. 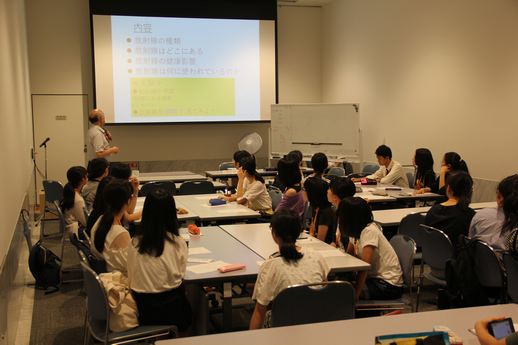 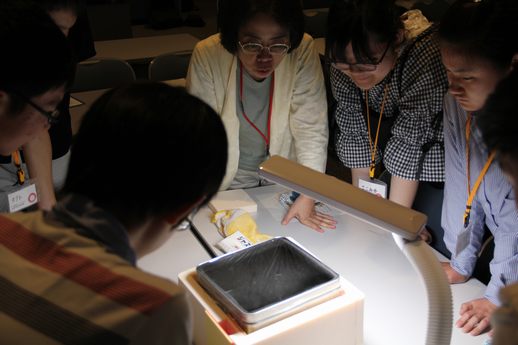