Past Results and Future Studies

Chromosomes are composed of long thin molecules of DNA. When cells are exposed to radiation or carcinogens, DNA sometimes breaks, and the broken ends may rejoin in different patterns from their original arrangement. The abnormalities that result are termed “chromosome aberrations” and may be visualized at mitosis when cells divide.

Among different types of aberrations, dicentric chromosomes are relatively easy to detect, and their frequency is therefore useful as a biological dosimeter. However, dicentric frequency declines within a few years because the presence of two centromeres in one chromosome interferes with cell division. Thus, the frequency of dicentric chromosomes can be applied to recent exposure cases only. Since A-bomb survivors were exposed to radiation many years ago, dicentric frequency is no longer useful for biodosimetry, and the frequency of translocations (and inversions) is used instead. Such aberrations have a single centromere per chromosome and hence can divide so that the altered chromosome persists for many years. However, they were more difficult to detect by conventional staining methods.

Figure 1 shows the relation between DS86 dose and the mean fraction of cells with aberrations (mainly translocations) measured by conventional staining in survivors exposed in typical Japanese houses in Hiroshima and Nagasaki. The small but consistent differences between the two cities may be due either to different scoring efficiency of aberrations in the two laboratories or to differential errors in DS86 dose assignments.

Figure 1. Relationship between fraction of cells with chromosome aberrations and radiation dose to AHS survivors exposed in typical Japanese houses

Currently, chromosome studies for survivors in both cities are examined solely in the Hiroshima laboratory, using a modern chromosome painting method (fluorescence in situ hybridization [FISH]). Chromosomes 1, 2, and 4 are stained yellow and other chromosomes red so that translocations between yellow and red chromosomes can be detected unambiguously (Figure 2). The FISH technique has made translocation detection easier and more accurate and has been used successfully in studies of radiation exposure accidents, such as Chernobyl. 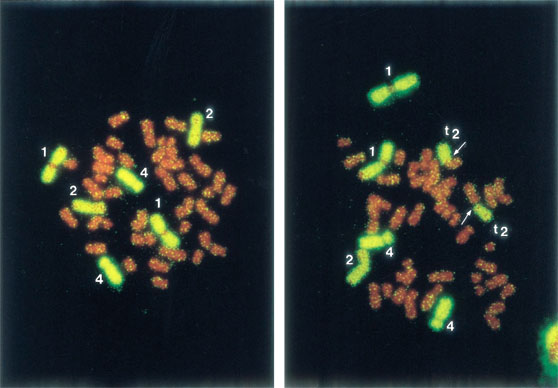 Figure 2. Metaphases labeled with fluorescence in situ hybridization (FISH). The left metaphase shows a normal cell and the right, a translocation indicated by arrows.

Although fetuses had been regarded as radiosensitive, chromosome aberration data for survivors irradiated in utero did not show a radiation effect when their blood lymphocytes were examined at about 40 years of age. A mouse study also confirmed that chromosome aberrations were not seen in offspring 20 weeks after in utero radiation exposure, although they were seen in mothers after exposure in adulthood.

References about this subject