For more than 60 years, follow-up study has been conducted for at least 200,000 people, including A-bomb survivors, those exposed in utero, and A-bomb survivors’ children as well as non-exposed individuals and their children. From various angles, we investigate the types of diseases that lead to the deaths of A-bomb survivors and their children, as well as mortality rates and the causes of death among these people, and study whether there is any difference in the mortality rates and the causes of death between these people and people not exposed to radiation and their children. For such exposed and non-exposed people, we investigate what diseases will increase in the future, and what types of cancer are increasing. We analyze whether there is any difference in the mortality rate, the cause of death and the incidence rate of cancer and other diseases because of radiation dose received or the age of exposure, as well as whether there is any effect from factors other than radiation, including smoking. These studies are mainly conducted by the Departments of Epidemiology and Statistics.

Past radiation-related mortality in the Life Span Study 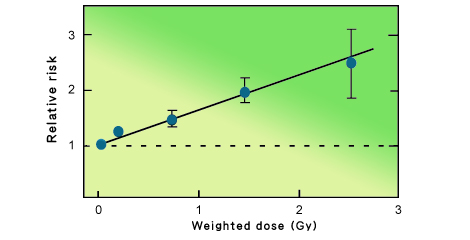 Relationship between radiation dose and the relative risk of incidence of all cancers, excluding leukemia