The dosimetry system provides individual dose estimates based on information regarding each survivor’s location and shielding situation at the time of the bombings. The current dosimetry system, referred to as DS02, was introduced in 2002 and is based on theory of modern nuclear physics validated by the measurements of existing exposed materials, such as brick and tiles.

For survivors who were within about 2 km of the hypocenter, DS86 information is based on detailed shielding histories obtained through interviews conducted during the late 1950s and early 1960s. Estimates for other survivors are based on less detailed information provided in response to questionnaires. Dose estimates are presently available for 92% of the approximately 100,000 survivors in the entire cohort and about 80% of those who were exposed within 2 km of the hypocenters. Those for whom estimates are not available had shielding situations that were difficult to assess.

There is some imprecision in dose estimates due to many factors. Survivor location is not always known precisely, and it would be impossible to account in detail for all aspects of shielding. In addition, yields of the bombs and some technical issues regarding the characteristics of the radiation can only be estimated. Generally speaking, it is believed that typical random errors in dose estimates may be on the order of ±35%. Special statistical methods have been developed to reduce the systematic effect on risk estimation that would arise from such random errors. 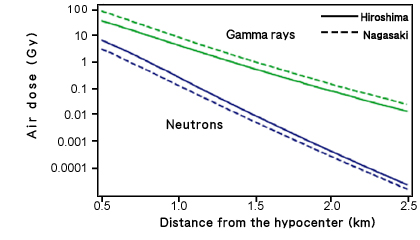 Most radiation exposure was through gamma rays, but there was a small neutron component. In Nagasaki, this neutron component is believed to be virtually negligible, but for Hiroshima, it is somewhat larger, and there is some indication that the neutron exposures in Hiroshima may need revision. Neutrons are believed to have a greater biological effect per unit dose than gamma rays, and many analyses use a weighted total dose, such as the sum of the gamma dose in gray (Gy) and 10 times the neutron dose, intended to approximate an equivalent pure gamma ray dose, ie, units in weighted dose (Gy).

DS02 provides estimates of gamma ray and neutron doses to 15 organs. These organ doses account for shielding of the organs by the body and consider the survivors’ orientation and position at the time of the bombings as well as the external shielding referred to above. Analyses for specific cancer sites, such as stomach cancer, are based on these organ doses.

Some effects of A-bomb radiation are “recorded” in blood cells and tooth enamel and can be measured even now. Such measurements allow scientists to better estimate the doses of radiation received by individual survivors. (See table below.)

This method focuses on the damage that radiation causes to the genetic material (DNA) of cells. In principle, measurement can be made of either damage to specific genes (mutated cells) or chromosome aberrations (observed at the time of cell division). However, these abnormalities are not caused by radiation alone. They also arise naturally at a certain rate when cell division takes place. Consequently, the frequency of these abnormal cells usually increases with age. Because the increase in frequency of these abnormal cells varies from person to person, considerable differences are often seen among aged individuals when compared to younger persons. In fact, this is a major obstacle to studying the effects of low-dose radiation. Furthermore, cells are capable of repairing DNA damage. For this reason, the extent of damage is not related to total dose alone, but depends on the time course over which it is received. The effects of instant exposure to radiation (acute exposure), as in the case of the A-bomb, are greater than the effects of the same total amount of radiation received gradually over a long period of time (chronic exposure), as in the case of people living in the area contaminated by the Chernobyl accident. Nevertheless, measurements of such damage can be helpful in assessing radiation exposure, especially in conjunction with other indicators.

Recently, it became known that measuring radicals recorded in tooth enamel is very effective for assessing radiation dose. In this case, enamel is separated from teeth that have been extracted for medical reasons and the presence of radicals is quantified by a method called electron spin resonance (ESR). Because the ESR signal intensity is linearly correlated with the amount of radiation received, we can estimate the dose from the signal intensity. This method can be used equally well for either acute exposure or chronic exposure to measure total dose. There is great hope that this method will contribute to assessing doses of radiation received by people who were exposed in the Chernobyl accident.