Use of Cancer Registry Data

Management of these registry projects, which comprehensively cover both cities, was originally entrusted to the Atomic Bomb Casualty Commission (ABCC)－the predecessor of RERF－and later to RERF, by the local medical associations. Approximately 21,000 cancer cases are registered in Hiroshima prefecture and 11,000 cases in Nagasaki prefecture annually. Approximately 3% of these cases have come from RERF’s Life Span Study cohort. The medical associations have requested that all physicians and hospitals report cancer cases to the cancer registries, and the number of cases reported has increased in recent years due to introduction of an internal cancer-registry system at regional cancer-treatment hub hospitals. Personnel at RERF’s Epidemiology Department regularly visit major local hospitals for record abstraction, with about 20% of the cases in both Hiroshima and Nagasaki having been collected.

Because of these active approaches for case ascertainment and data collection, and the close collaborative relationship with local medical organizations and hospitals, data on cancer incidence obtained from these registries are considered to be of very high quality. RERF applies for use of data collected in the cancer registry projects for its own research. Analyses of these data have provided valuable information on cancer incidence not only in the A-bomb survivor population but also in ordinary populations. The information provided is particularly valuable for estimating the risk of tumors of relatively low mortality, such as skin, breast, and thyroid cancers. Considering progress in cancer treatment in recent years, these cancer registry projects likely will play an increasingly important role in the future. 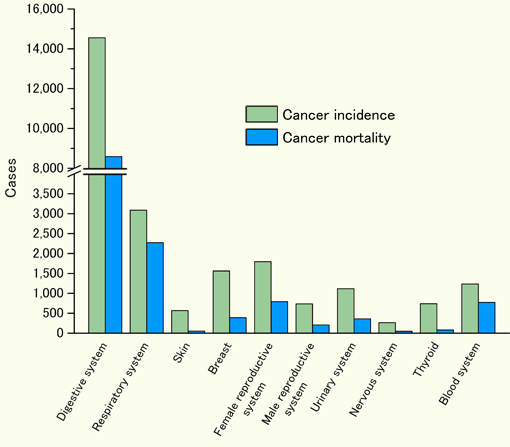